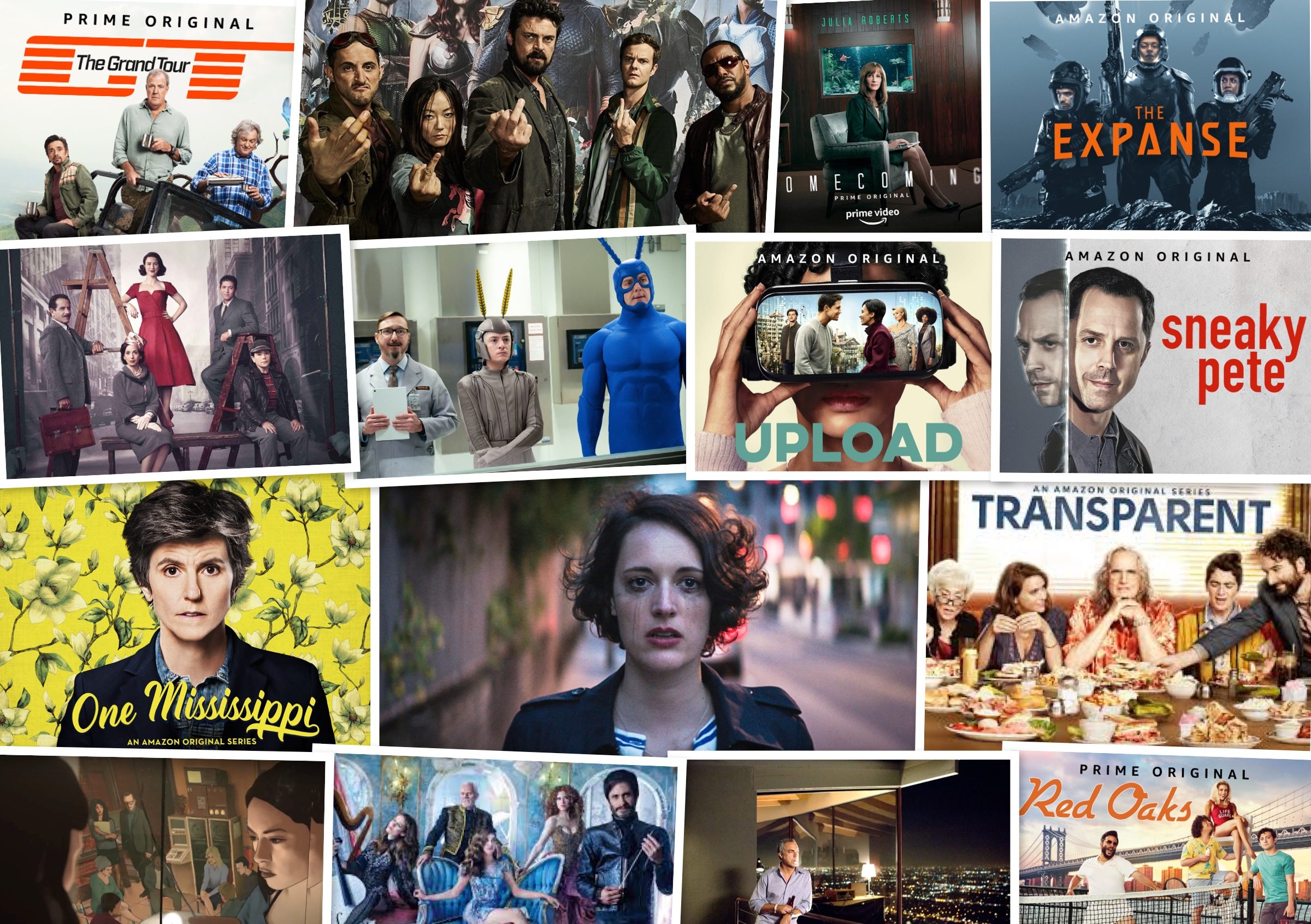 If you’re stuck in a cycle of thumbing through streaming sites, looking up trailers, and ultimately rewatching “The Office” for the millionth time, you may want to set your sights on a smaller, choicer pool of options — like a few of the top critically acclaimed original series on Prime Video.

The Boys is set in a universe in which superpowered people are recognized as heroes by the general public and owned by a powerful corporation, Vought International, which ensures that they are aggressively marketed and monetized. Outside of their heroic personas, most are arrogant and corrupt. The series primarily focuses on two groups: the titular Boys, vigilantes looking to keep the corrupted heroes under control, and the Seven, Vought International’s premier superhero team. The Boys are led by Billy Butcher, who despises all superpowered people, and the Seven are led by the egotistical and unstable Homelander. As a conflict ensues between the two groups, the series also follows the new members of each team: Hugh “Hughie” Campbell of the Boys, who joins the vigilantes after his girlfriend is killed in a high-speed collision by the Seven’s A-Train, and Annie January/Starlight of the Seven, a young and hopeful heroine forced to face the truth about the heroes she admires.

A dry-witted woman, known only as Fleabag, has no filter as she navigates life and love in London while trying to cope with tragedy. The angry, grief-riddled woman tries to heal while rejecting anyone who tries to help her, but Fleabag continues to keep up her bravado through it all. Comic actress Phoebe Waller-Bridge stars as the titular character on the series, which is based on Waller-Bridge’s 2013 one-woman show of the same name.

Follow Jeremy, Richard, and James, as they embark on an adventure across the globe, driving new and exciting automobiles from manufacturers all over the world.

Set in 1950s Manhattan, The Marvelous Mrs.Maisel is a 60-minute dramedy that centers on Miriam “Midge” Maisel, a sunny, energetic, sharp, Jewish girl who had her life mapped out: go to college, find a husband, have kids, and throw the best Yom Kippur break-fasts in town. Soon enough, she finds herself exactly where she had hoped to be, living happily with her husband and two children in the Upper West Side. A woman of her time, Midge is a cheerleader wife to a man who dreams of a stand-up comedy career, but her perfect life is upended when her husband suddenly leaves her for another woman. Utterly unprepared, Midge is left with no choice but to reevaluate her life. When she accidentally stumbles onto the stage at a nightclub, she discovers her own comedic skills and decides to use this newfound talent to help her reinvent her life.

Two hundred years in the future, in a fully colonized solar system, police detective Josephus Miller (Thomas Jane), who was born in the asteroid belt, is given the assignment to find a missing young woman; Julie Mao (Florence Faivre). Meanwhile, James Holden (Steven Strait), the first officer of an ice freighter, is witness to an unprovoked attack upon the ship, by craft believed to be from Mars (MCRN Federation). As news of the attack spreads throughout the system, the incident’s flow-on threatens to destabilize already tenuous relations between Earth, Mars and The Belt. Far away from the struggles in deep space, on Earth, Chrisjen Avasarala (Shohreh Aghdashloo), a powerful United Nations executive and diplomat, works to prevent war between Earth and Mars by any means. Soon, the 3 find out the missing woman and the ice freighter’s fate are part of a vast covert conspiracy which threatens all humanity.

Harry Bosch is an irreverent homicide detective in Los Angeles. Like any good protagonist he has problems with authority, follows his gut and bends a few rules while achieving the best solved case rate in all of California. Whatever situations the writers put him into he will undoubtedly be entertaining as he pursues justice.

John Tavner doesn’t really fit in with his quirky colleagues at the industrial piping corporation where he works. They don’t really know much about him, but what they don’t realize is that his life has been anything but mundane. To prevent Iran from going nuclear, he has assumed a fake persona as an average businessman when in reality he is actually a highly skilled intelligence officer, who took the piping job because of the routine business trips to Luxembourg, and because the job is secluded and too dull to be noticed. Unfortunately for him a European cop is at his heels trying to discover who he is, his incessantly grim and nervous coworker Mr. Icabod has figured out that he isn’t who he says, and Steven, a chubby employee with a recent brain injury, is starting to remember a horrible act which John may have inflicted.

A woman discovers she has a new relationship with time after surviving a car accident that almost killed her. “Undone” uses a mix of live action motion capture and rotoscope animation to deliver dazzling visuals, and add mystique to a time-bending storyline.

Mozart in the Jungle

Love, money, ambition and music intertwine in Mozart in the Jungle, a half hour comedic drama that looks at finding yourself and finding love while conquering New York City. A brash new maestro Rodrigo stirs up the New York Symphony as young oboist Hailey hopes for her big chance.

A con man on the run from a vicious gangster takes cover by assuming the identity of his prison cellmate, Pete, reuniting with his estranged family, that threatens to drag him into a world just as dangerous as the one he’s escaping.

A man is able to choose his own afterlife after his untimely death by having his consciousness uploaded into a virtual world. As he gets used to his new life and befriends his angel (real world handler) questions about his death arise.

The Man in the High Castle

What would it be like if the Allied Powers had lost WWII, and Japan and Germany ruled the United States? In a dystopian America dominated by Nazi Germany and Imperial Japan, a young woman discovers a mysterious film that may hold the key to toppling the totalitarian regimes.

A coming-of-age comedy set in the “go-go” 80s about a college student enjoying a last hurrah before summer comes to an end–and the future begins.

Mort has a secret that he really wants to tell his three adult children, who are so self-absorbed they don’t see that something has changed for divorced, girlfriendless dad. Even when he invites them to dinner en masse to share his news, somehow, the conversation becomes about them. The secret unfolds, though, when he comes home and sees his married daughter getting intimate with her ex. Now, he knows her secret; she learns his; and the dysfunctional family finds one secret after another being exposed.

Good intentions. Erratic bosses. Mounting paranoia. Unforeseen consequences spiraling out of control. Heidi (Julia Roberts) works at Homecoming, a facility helping soldiers transition to civilian life. Years later she has started a new life, when the Department of Defense questions why she left Homecoming. Heidi realizes there’s a whole other story behind the one she’s been telling herself.

In a world where superheroes have been real for decades, an accountant with no superpowers comes to realize his city is owned by a super villain. As he struggles to uncover this conspiracy, he falls in league with a strange blue superhero.

This semi-autobiographical dark comedy starring Tig Notaro follows her as she returns to her hometown after the sudden death of her mother. Still reeling from her own declining health problems, Tig struggles to find her footing with the loss of the one person in her life who understood her. All while dealing with her clingy girlfriend and her dysfunctional family.