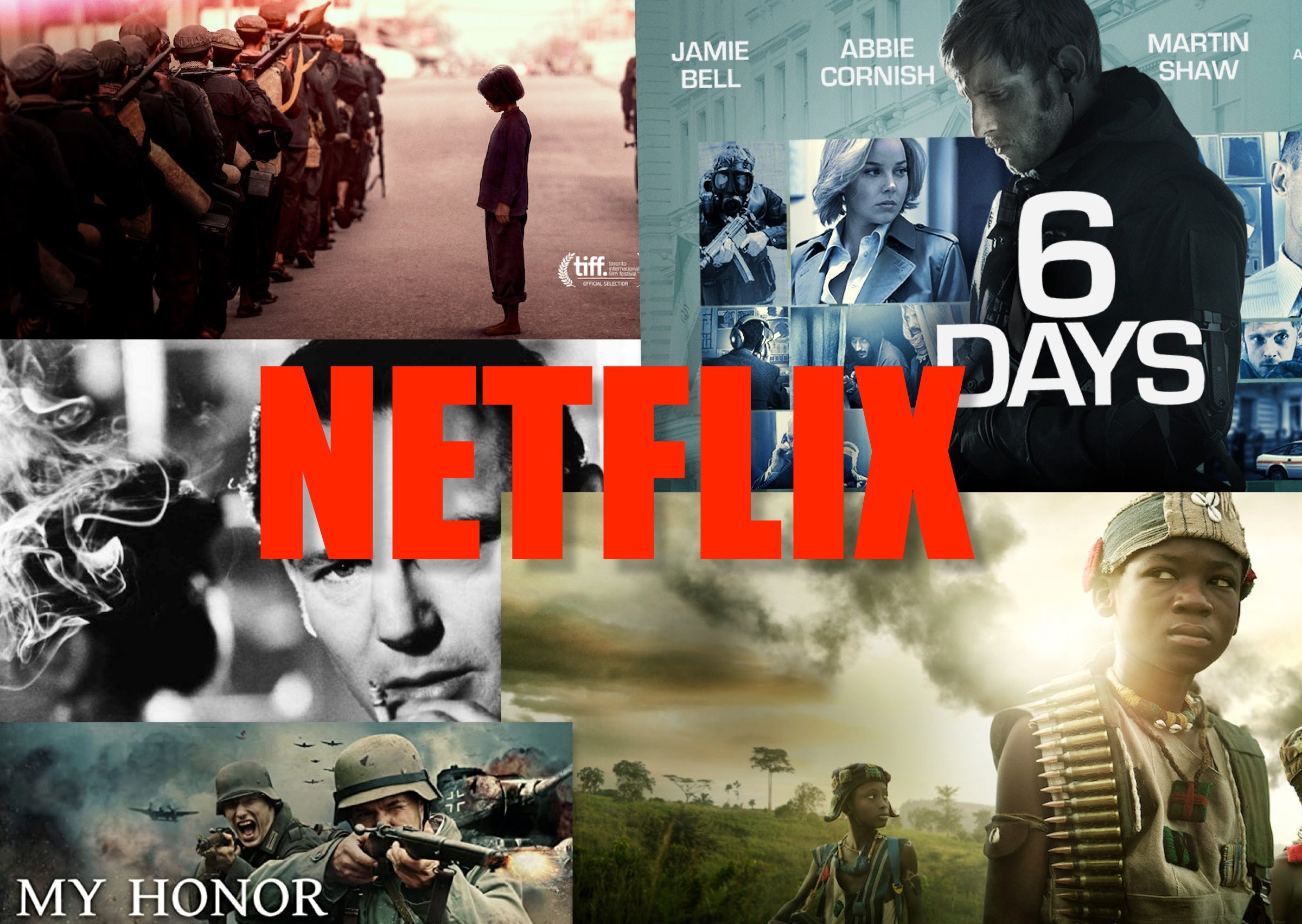 War films give us viewers the opportunity to observe military conflicts from a safe setting. Regardless of whether it is imposing action, touching horror or the heroic struggle between good and evil: the appeal of war films has many faces.As long as you have your steel helmet and the bag of chips at hand, you can start!

A good thing to watch on Netflix which is about the era when Jews were prosecuted by the Nazis. During that time a German industrialist named Oskar Schindler tried to save his Jewish employees. This is one of the best war documentaries, ‘Schindler’s List’ is at once the most celebrated and most keenly criticized film in the Spielberg canon. In Schindler’s List, there is an unavoidable belief in hope and optimism among the powerless, among the ones who are trapped and tormented.

Anyone who volunteered to work with a weapon during the Second World War did so primarily to defend the security of their homeland by force. However, medical student Desmond Doss (Andrew Garfield) is driven by a different motivation. The protagonist in Mel Gibson’s “Hacksaw Ridge” holds on to his own values ​​even in times of crisis and absolutely refuses to carry a rifle in the ranks of the US Army. The lived pacifism means for the main character of the film not only a lot of ridicule by his other comrades, but also a personal danger for body and soul. During the fighting in Okinawa, Japan, Desmond is employed as a medic and learns that trying to save the lives of his comrades is becoming a struggle of its own.

The plot of the US-British co-production “Heart of Steel” leads us straight to the last days of the Second World War. In April 1945 the Third Reich was in ruins. For the other defenders of Nazi Germany, however, this only means fighting the hated invaders even more doggedly. Sergeant Wardaddy (Brad Pitt) receives the explosive order to penetrate deep into enemy territory with his armored troops and to put an end to the Nazi regime once and for all.

Many war films are still essentially black and white, despite modern color schemes. The struggle between good and evil usually has no shades of gray, the inhabitants of the warring nations are all evildoers who have to be stamped out. The plot of “Sand Castle” shows us in a touching way what traits the encounter between soldiers and civilians can take on in reality. The film relocates its plot to the Iraq war. Protagonist Matt Ocre, played by Nicholas Hoult, was entrusted with the task of repairing a destroyed water pipe in 2003. In the course of the work, American occupiers and Iraqi residents find each other and begin to help each other. However, this cooperation is a thorn in the side of the resistance fighters in the region.

The US production “American Sniper” also chooses Iraq as the location. In Clint Eastwood’s film, we follow the sniper Chris Kyle, portrayed by iconic actor Bradley Cooper. As a sniper, the soldier plays a crucial role, as he deliberately eliminates enemy posts and thus saves the lives of countless comrades. However, it doesn’t take long before Chris’s shooting skills are also known in the ranks of the enemy, which puts the protagonist of the film directly in the crosshairs of his opponents.

Comradeship is very important in the ranks of the soldiers. The feeling of being able to rely on the help of a large community at all times in a threatening situation is an essential psychological factor in warfare. “Lone Survior” with Mark Wahlberg in the lead role creates a scenario based on true events, in which a small group of American soldiers is faced with a superior force of more than 150 enemy fighters in the Afghan war. The team is henceforth in a cauldron of horror in which the hope of survival fades with each passing day.

The battles fought in “The Last Castle” from 2001 mainly take place within the walls of a military prison. Protagonist Eugene Irwin (Robert Redford), a once highly respected general in the US Army, is sentenced to long imprisonment for insubordination. To escape from his hopeless situation, the main character instigates a prison riot.

In “Shooter” Mark Wahlberg slips into the role of the sniper Swagger, who falls victim to a devious intrigue. The creators of the wrong game lure the title character into a trap, suddenly mistaking Swagger for the murderer of a politician. From then on, the sniper tries to escape the persecution of his adversaries and to restore justice.

Director Chris Weitz’s historical thriller is based on the story of how a group of Israeli secret agents arrested notorious SS officer Adolf Eichmann – the man who masterminded the “Final Solution” – in Argentina. Oscar Isaac plays the legendary Mossad agent Peter Malkin, while Ben Kingsley plays his emotionally manipulative arch-nemesis. After tracking Eichmann down to Buenos Aires, Malkin and his men captured him and brought him to Israel for a historic 8-month trial.

In 1961, the UN sends an Irish peacekeeper troop commanded by Commandant Pat Quinlan to Katanga, in Congo, to protect the inhabitants of the mining town of Jadotville in the beginning of a civil war. Meanwhile the UN advisor Dr. Conor Cruise O’Brien launches a military attack named Operation Morthor against the French and Belgian mercenaries. Soon there is a reprisal from the mercenaries and Quinlan and his men are left under siege by a huge number of Katangese and mercenary troops. Will the Irish soldiers resist the attack?

Follows the journey of a young boy, Agu, who is forced to join a group of soldiers in a fictional West African country. While Agu fears his commander and many of the men around him, his fledgling childhood has been brutally shattered by the war raging through his country, and he is at first torn between conflicting revulsion and fascination Depicts the mechanics of war and does not shy away from explicit, visceral detail, and paints a complex, difficult picture of Agu as a child soldier.

Five former Special Forces operatives reunite to plan a heist in a sparsely populated multi-border zone of South America. For the first time in their prestigious careers these unsung heroes undertake this dangerous mission for self instead of country. But when events take an unexpected turn and threaten to spiral out of control, their skills, their loyalties and their morals are pushed to a breaking point in an epic battle for survival.

Untersharführer Ludwig Herckel (Leone Frisa), is a devoted and patriotic soldier of the elite 1st SS Panzer Division Leibstandarte SS Adolf Hitler. As the action begins, we follow a small group of experienced infantry soldiers in combat against Soviet forces. An explosion knocks Herschel unconscious and he wanders the woods in a daze. He is met by another soldier who happens to be from his same town back in Germany. This solder tells Herschel, in confidence, he worries about his wife as she is Jewish. When Herschel goes on leave back to Germany, he looks up the wife and finds the Gestapo attempting to arrest her. When she runs, a Gestapo officer shoots and kills her. Herschel is troubled by this act, but returns to his outfit anyway. Now posted to the western front, Herschel witnesses the decline of the army group, loss of comrades in arms, and multiple acts of war crimes in the handling of POW’s for both sides.

Civil Unrest in the European country of Moldova has US forces engaging the insurgents however there is a new threat who has decided both are their enemy. This new threat resides in an alternative spectrum that makes them invisible to the naked eye and instant death to anyone confronting them. Locals believe they are Spirits of War but others believe they are superior arms technology fabricated by the Moldova government.

In April 1980, armed gunmen stormed the Iranian Embassy in Princes Gate, London and took all inside hostage. Over the next six days a tense standoff took place, all the while a group of highly trained soldiers from the SAS prepared for a raid the world had never seen.

A general from the U.S. is sent to Afghanistan to “clean” the situation up after eight years of war in the country. He finds himself among tired soldiers and disillusioned politicians eager to leave. In this situation, he feels his mission is to “win” the war, something deemed impossible by everyone around him.

In the 70’s, a Cambodian middle-class girl sees the lives of her family and her turning upside-down when the Khmer Rouge invades the Cambodia. They leave their comfortable apartment and lifestyle to live in a primitive working camp. Her father, a former officer, is killed and the family splits to survive

Hal (Timothée Chalamet), wayward prince and reluctant heir to the English throne, has turned his back on royal life and is living among the people. But when his tyrannical father dies, Hal is crowned King Henry V and is forced to embrace the life he had previously tried to escape. Now the young king must navigate the palace politics, chaos and war his father left behind, and the emotional strings of his past life – including his relationship with his closest friend and mentor, the aging alcoholic knight, John Falstaff (Joel Edgerton).

After being declared “Outlaw” by the occupying English Empire, Robert the Bruce (Chris Pine) raises an army of Scottish fighters in rebellion. Twists and turns all across the Scottish countryside lead this film on an epic, “true to historical events”, journey that captures heroism at its core!

This movies rightly conveys our prejudiced mindset, preconceived notions and exposes the greed and arrogance of the superpowers. A CIA agent on the ground in Jordan hunts down a powerful terrorist leader while being caught between the unclear intentions of his American supervisors and Jordan Intelligence.