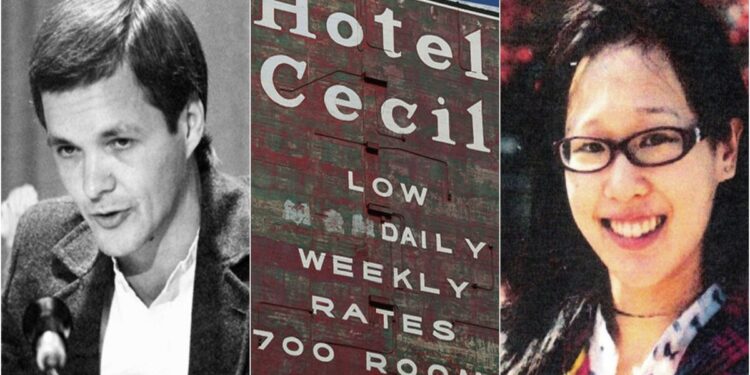 Netflix Cecil Hotel documentary, in which many mysterious events were experienced, was released.

Here is that highly anticipated documentary!

– Crime Scene: The Vanishing at the Cecil Hotel

College student and tourist Elisa Lam vanishes, leaving behind all of her possessions in her hotel room. The Cecil Hotel grows in infamy.

The Chilling Story of
Cecil Hotel

Cecil Hotel, located in the heart of Los Angeles, started to serve in 1927. Featuring stained glass windows, a marble lobby, 700 rooms, palm trees and a flamboyant mezzanine, this hotel cost millions of dollars. When the hotel first opened, it offered an economical accommodation alternative to tourists and business travelers. However, two years later, the whole world was shaken by a major economic crisis. This crisis also hit Los Angeles and many people were left homeless. There were so many unemployed and homeless people around the hotel that after a while it started to host more homeless people than tourists. In the 1930s, Cecil Hotel; It had become the meeting place of criminals, sex workers and murderers. In fact, some of America’s most murderous serial killers stayed in this hotel for a long time.

The first of the suicide cases that took place at the Cecil Hotel occurred on 19 November 1931.

WK Norton, 46, made a reservation at the Cecil Hotel under the name of “James Willys” on 12 November. Why Norton registered at the hotel under a different name is unknown. He was found dead by the housekeeper exactly one week after he settled in his room. Norton committed suicide by drinking poison, according to the forensic report. This death was the first in a series of suicide cases in the hotel. The following year, 25-year-old Benjamin Dodich shot himself with his gun the day he settled in the hotel.

The Dodich investigation was very short. There was no sign of a break in his room and the gun belonged to him. Therefore, the second death case was recorded as suicide. In 1934, 53-year-old Louise D. Borden was found in her room in Cecil with her throat cut. Borden left a note before he died stating that he was in poor health and therefore did not want to live. Authorities state that Borden died of blood loss shortly after cutting his throat with a razor. Until 2015, dozens of people ended their lives at Cecil Hotel. So much so that the hotel started to be known as “The Suicide” since the 1960s.

A suspicious death: suicide or murder?

In 1937, a young woman named Grace E. Magro fell from the 9th floor of the hotel and got caught in the telephone wires. Magro did not die during the incident due to entanglement in telephone wires, but was seriously injured. At the end of great efforts, the woman was taken to the hospital and died despite all the interventions. Was Magro fallen by accident, as alleged, or was he the victim of a murder? These questions cannot be answered even today. After the incident, Magro’s friend MW Madison, with whom he shared the room, was questioned repeatedly. Madison could not explain how her friend fell out of the window. Since there was no evidence, he could not be charged with murder. Therefore, Magro’s death was recorded as an accident in the police records.

In 1944, a 19-year-old woman named Dorothy Jean Purcell gave birth at Cecil Hotel. Unaware that she was pregnant, Dorothy threw her baby out of the hotel window.

Purcell stated that he did not want to disturb his boyfriend with the baby’s cries. For this reason, he threw the baby out of the window. In 1945, he was found not guilty on the grounds that he was mentally unstable and was released.

A horrible incident that has been the subject of many TV series and movies, including American Horror Story : the murder of Elizabeth Short

In 1947, one of the most talked about murders in American history took place at the Cecil Hotel. Elizabeth Short, known as the “Black Dahlia”, was a young and beautiful 22-year-old woman. On January 15, his naked body was found in a vacant lot near the Cecil Hotel. Elizabeth’s body was cut into two parts, she was raped, her face and breasts cut off. The killer carefully cleaned Elizabeth’s body. Therefore, no traces that could be considered as evidence, including fingerprints, were found at the scene. Eyewitnesses had seen Elizabeth in the Cecil Hotel’s bar the night before the murder. At the first stage of the Elizabeth case, 750 inspectors were assigned. Too many people were questioned as murder suspects. However, since there is no clear evidence, Elizabeth’s murder has not been enlightened to date.

In 1964, the Cecil Hotel is once again experiencing the horror. A woman named Goldie Osgood is brutally murdered in her room.

Goldie Osgood was a retired telephone operator. She loved to feed birds, so her acquaintances called her a dove woman. On June 4, 1964, the hotel housekeeper found Goldie Osgood stabbed naked in her room. Osgood was raped, money stolen, and violent. Shortly after his lifeless body was found, Jacques B. Ehlinger, whose clothes were covered in blood near the hotel, was arrested. Ehlinger confessed to being near the hotel at the time of the murder. The blood on his clothes was thought to belong to Osgood. Everyone was sure that Ehlinger was the killer. However, this could not be proven, Ehlinger was released from lack of evidence. Osgood’s killer has not been found so far.

Richard Ramirez, known as the Night Stalker, had become America’s nightmare with the murders he committed between 1984-85. The murderer, who killed 13 people in a year, entered the house of his victims through the window in the morning and killed these people after raping them. In the morning, Ramirez was leaving his room naked after throwing his bloody clothes into the hotel trash. Cecil Hotel was in such a terrible state that no one suspected it. In 1985, all television channels were full of news of this horrible serial killer. A sketch of the killer was drawn with the statements of some eyewitnesses. Unaware of this, Ramirez was diagnosed trying to steal a car and was then arrested and sentenced to death. However, the killer died in prison while awaiting his execution.

By 1991, Cecil Hotel was home to another serial killer, Jack Underweger. Underweger was not only the nightmare of Los Angeles, but also of Austria and the Czech Republic. In every country he went, he entered the homes of his victims and brutally killed them after raping them. Interestingly, Underweger used his victims’ bras as weapons. He strangled his victims with bra instead of firearms. Convicted of 11 murders when caught in 1994, the killer was sentenced to life imprisonment. Underweger, who was found to stay at the Cecil Hotel when he committed the murders in Los Angeles, made a statement stating that Ramirez chose Cecil for staying in this hotel.

The last victim of the chain of death at the Cecil Hotel: How did Elisa Lam die?

21-year-old Elisa Lam lived with her family in Canada. He had a severe depression late in his life. Therefore, he wanted to leave his bad days behind by going on vacation alone. Although her parents opposed this idea, they thought their daughter would be happy and let her go to America. Elisa was looking for her loved ones at every moment of her Los Angeles vacation and uploading photos to social media. He had a last phone call with his family on January 31, 2013. After this date, he could not be reached for a long time. About 3 weeks after Elisa mysteriously disappeared, hotel guests started to complain about the color and smell of the water. When the hotel’s maintenance worker climbed onto the roof to solve the problem, Elisa Lam’s body was found in the water tank.

This death was spoken around the world when Elisa released the last image projected on security cameras.

In the video, Elisa was taking the elevator alone, seeming to be talking to someone even though she was not with her, hiding in the corner of the elevator and pressing the keys of all floors senselessly. He was behaving so strangely in the video that in a short time millions of people began to wonder what happened to Elisa. According to the most common theory, Elisa was running from someone who followed her. So he hid in the corner of the elevator and hurriedly hit the keys of all floors. Hotel staff who wanted to protect the killer cut the video and quickly removed the footage.

According to the autopsy report, Elisa’s blood did not contain alcohol or drugs. There were no signs of external trauma in his body. Based on the girl’s depression, the police announced the death of Elisa as a suicide case and closed the file. However, her family, friends, and social media users thought Elisa was murdered. For some, this death had supernatural explanations. The reason why Elisa Lam’s death was attributed to supernatural events was the movie “Dark Water”, which was released in 2005. In this movie, the body of a little girl was found inside the water tank. The events in the elevator, the clothes worn in the movie, what happened all looked like the Elisa incident. There has been much speculation about Elisa’s death. However, there was no consensus on why he actually died.

The hotel managers decided to make a name change to make you forget Cecil’s terrible past. The hotel resumed service in 2013 under the name “Stay on Main”.

In 2017, the hotel was completely renovated. Furniture has changed, decoration has been redone, a pool has been added to the rooftop… However, no change could make Cecil forget his bloody past.