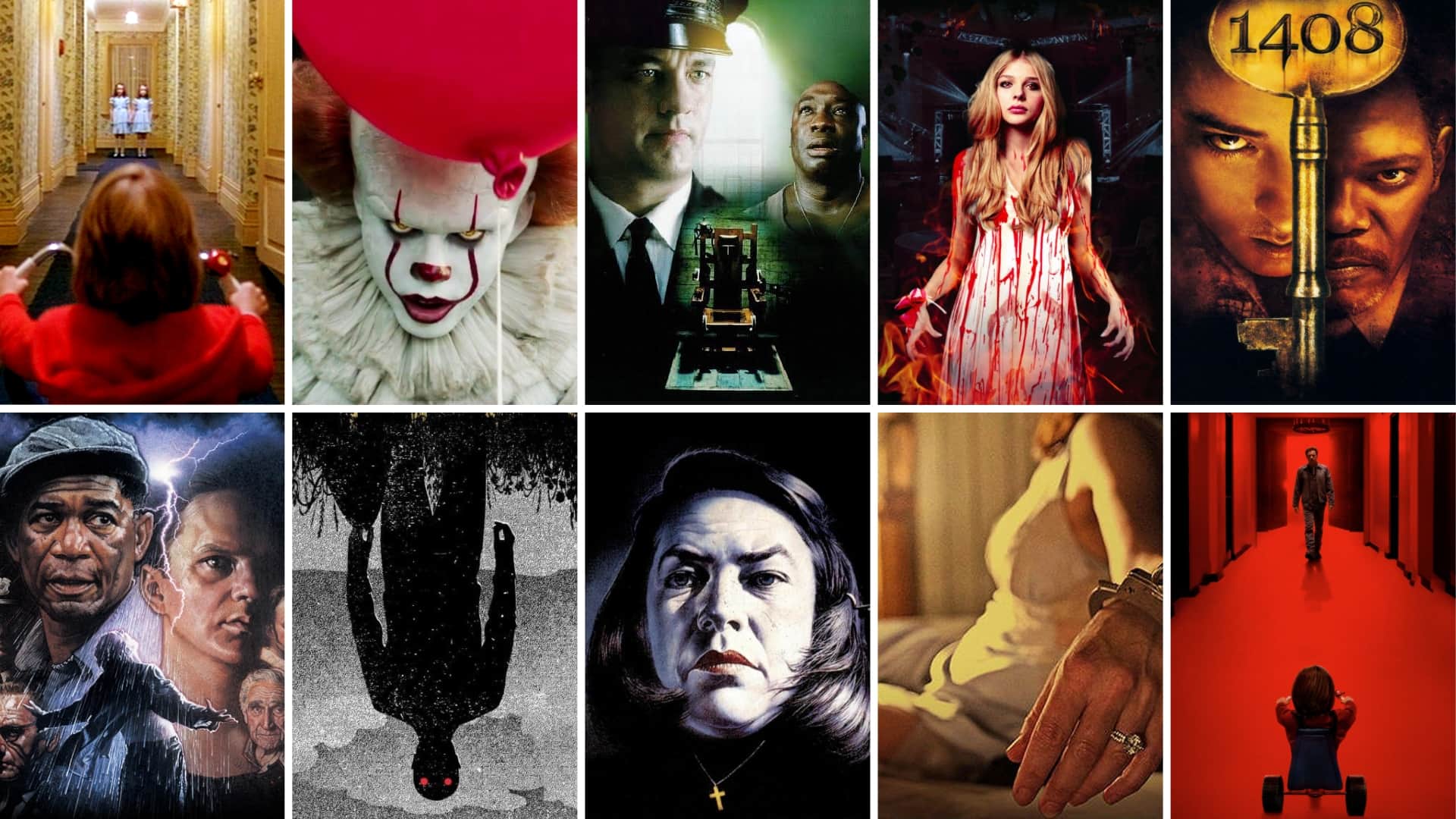 His Books Were Written For Cinema! Here are those movies, have a good time…

Chronicles the experiences of a formerly successful banker as a prisoner in the gloomy jailhouse of Shawshank after being found guilty of a crime he did not commit. The film portrays the man’s unique way of dealing with his new, torturous life; along the way he befriends a number of fellow prisoners, most notably a wise long-term inmate named Red.

Death Row guards at a penitentiary, in the 1930’s, have a moral dilemma with their job when they discover one of their prisoners, a convicted murderer, has a special gift.

Haunted by a persistent writer’s block, the aspiring author and recovering alcoholic, Jack Torrance, drags his wife, Wendy, and his gifted son, Danny, up snow-capped Colorado’s secluded Overlook Hotel after taking up a job as an off-season caretaker. As the cavernous hotel shuts down for the season, the manager gives Jack a grand tour, and the facility’s chef, the ageing Mr Hallorann, has a fascinating chat with Danny about a rare psychic gift called “The Shining”, making sure to warn him about the hotel’s abandoned rooms, and, in particular, the off-limits Room 237. However, instead of overcoming the dismal creative rut, little by little, Jack starts losing his mind, trapped in an unforgiving environment of seemingly endless snowstorms, and a gargantuan silent prison riddled with strange occurrences and eerie visions. Now, the incessant voices inside Jack’s head demand sacrifice. Is Jack capable of murder?

It’s the summer of 1959 in Castlerock, Maine and four 12 year-old boys – Gordie, Chris, Teddy and Vern – are fast friends. After learning of the general location of the body of a local boy who has been missing for several days, they set off into woods to see it. Along the way, they learn about themselves, the meaning of friendship and the need to stand up for what is right.

Best-selling novelist Paul Sheldon is on his way home from his Colorado hideaway after completing his latest book, when he crashes his car in a freak blizzard. Paul is critically injured, but is rescued by former nurse Annie Wilkes, Paul’s “number one fan”, who takes Paul back to her remote house in the mountains (without bothering to tell anybody). Unfortunately for Paul, Annie is also a head case. When she discovers that Paul has killed off the heroine in her favorite novels, her reaction leaves Paul shattered (literally)…

It’s nearing the end of the school year. High school senior Carrie White is a social outcast, largely due to being unwise to the ways of the world based on her upbringing. Her mother, Margaret White, is a religious fanatic, her extreme views primarily targeted against sex, which she believes is a sin. Unleashes her telekinetic powers after being humiliated by her classmates at her senior prom.

A dangerous blizzard hits an isolated town and brings along a mysterious stranger intent on terrorizing people for his own desires.

A big-city reporter travels to the small town where her mother has been arrested for the murder of an elderly woman that she works for as a maid.

In the Town of Derry, the local kids are disappearing one by one. In a place known as ‘The Barrens’, a group of seven kids are united by their horrifying and strange encounters with an evil clown and their determination to kill It.

When a government-run lab accidentally lets loose a deadly virus, most of the population of the world is wiped out. Survivors begin having dreams about two figures: a mystical old woman, or a foreboding, scary man. As the story tracks various people, we begin to realize that the two figures exemplify basic forces of good and evil, and the stage is set for a final confrontation between the representatives of each.

Johnny Smith wakes from a coma due to a car accident, only to find he has lost five years of his life, and yet gained psychic powers. Foreseeing the future appears to be a ‘gift’ at first, but ends up causing problems.

The Draytons – David, Steff and their son Billy – live in a small Maine town. One night a ferocious storm hits the area, damaging their house. The storm is accompanied by a strange mist the following morning. David and Billy and their neighbour Brent Norton go into town and find themselves trapped in a grocery store with several other people. There they discover that the mist contains something frightening and intent on killing humans.

In 1960, a group of social outcasts who are bullied by a gang of greasers led by Henry Bowers are also tormented by an evil demon who can shape-shift into a clown and feed on children’s fears and kill them. After defeating the demonic clown as kids, it resurfaces thirty years later and they must finish it off as adults once again.

A man who specialises in debunking paranormal occurrences checks into the fabled room 1408 in the Dolphin Hotel.  he finds that guests of room 1408, once they have checked in, might never leave the room alive.

In a dystopian America, a falsely convicted policeman gets his shot at freedom when he must forcibly participate in a TV game show where convicts, runners, must battle killers for their freedom.