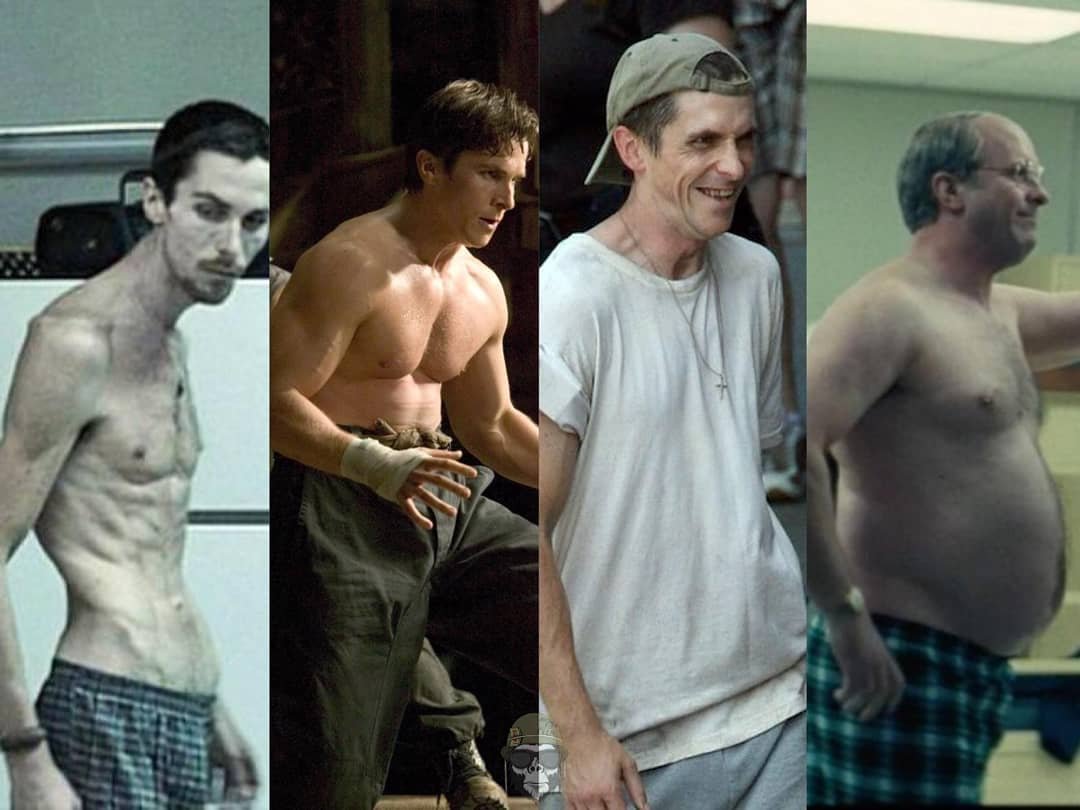 Christian Bale, who took another identity, another body, to his roles, did this in more than one movie. We’ve compiled for you the best post-2000 movies where we see him as a skeleton and sometimes overweight.
You won’t be able to believe your eyes on these changes.

Set within a year after the events of Batman Begins (2005), Batman, Lieutenant James Gordon, and new District Attorney Harvey Dent successfully begin to round up the criminals that plague Gotham City, until a mysterious and sadistic criminal mastermind known only as “The Joker” appears in Gotham, creating a new wave of chaos. Batman’s struggle against The Joker becomes deeply personal, forcing him to “confront everything he believes” and improve his technology to stop him. A love triangle develops between Bruce Wayne, Dent, and Rachel Dawes.

In the end of the nineteenth century, in London, Robert Angier, his beloved wife Julia McCullough, and Alfred Borden are friends and assistants of a magician. When Julia accidentally dies during a performance, Robert blames Alfred for her death, and they become enemies. Both become famous and rival magicians, sabotaging the performance of the other on the stage. When Alfred performs a successful trick, Robert becomes obsessed trying to disclose the secret of his competitor with tragic consequences.

American car designer Carroll Shelby and driver Ken Miles battle corporate interference and the laws of physics to build a revolutionary race car for Ford in order to defeat Ferrari at the 24 Hours of Le Mans in 1966.

In 2006-2007 a group of investors bet against the US mortgage market. In their research they discover how flawed and corrupt the market is.

The Fighter is a drama about boxer “Irish” Micky Ward’s unlikely road to the world light welterweight title. His Rocky-like rise was shepherded by half-brother Dicky, a boxer-turned-trainer on the verge of being KO’d by drugs and crime.

Trevor Reznik is a machinist in a factory. An extreme case of insomnia has led to him not sleeping in a year, and his body withering away to almost nothing. He has an obsessive compulsion to write himself reminder notes and keep track of his dwindling weight, both scribbled on yellow stickies in his apartment.

A small-time rancher agrees to hold a captured outlaw who’s awaiting a train to go to court in Yuma. A battle of wills ensues as the outlaw tries to psych out the rancher.

A wealthy New York City investment banking executive, Patrick Bateman, hides his alternate psychopathic ego from his co-workers and friends as he delves deeper into his violent, hedonistic fantasies.

The Flowers of War

An American finds refuge during the 1937 Japanese invasion of Nanking in a church with a group of women. Posing as a priest, he attempts to lead the women to safety.

In a futuristic world, a strict regime has eliminated war by suppressing emotions: books, art and music are strictly forbidden and feeling is a crime punishable by death. Cleric John Preston (Bale) is a top ranking government agent responsible for destroying those who resist the rules. When he misses a dose of Prozium, a mind-altering drug that hinders emotion, Preston, who has been trained to enforce the strict laws of the new regime, suddenly becomes the only person capable of overthrowing it.

When they discover that there is no more food due to the constant American bombings in the area and their guards intend to kill them, Dieter sets his plan in motion. However, an unexpected betrayal splits the group and Dieter and Duane find that the jungle is their actual prison.

A con man, Irving Rosenfeld, along with his seductive partner Sydney Prosser, is forced to work for a wild F.B.I. Agent, Richie DiMaso, who pushes them into a world of Jersey powerbrokers and the Mafia.

The story of Dick Cheney, an unassuming bureaucratic Washington insider, who quietly wielded immense power as Vice President to George W. Bush, reshaping the country and the globe in ways that we still feel today.

In 1892, a legendary Army Captain reluctantly agrees to escort a Cheyenne chief and his family through dangerous territory.

The Feds try to take down notorious American gangsters John Dillinger, Baby Face Nelson and Pretty Boy Floyd during a booming crime wave in the 1930s.