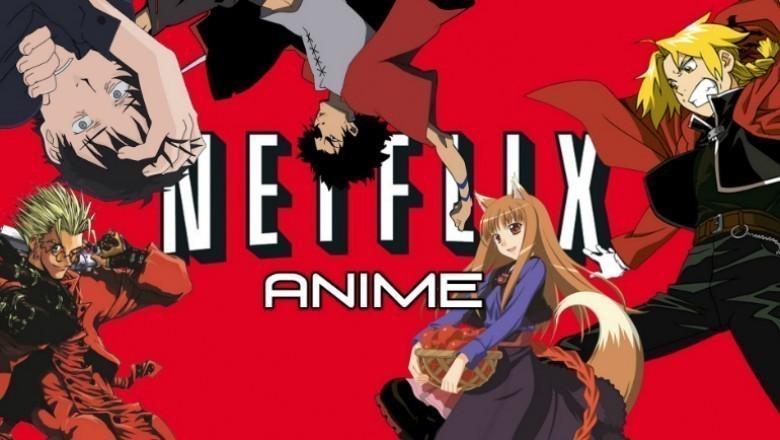 I have compiled anime contents on Netflix for you. Action-packed adventures, offbeat comedies, inspirational stories… 15 great anime you won’t get enough of watching.

In the aftermath of a great war, Violet Evergarden, a young female ex-soldier, gets a job at a writers’ agency and goes on assignments to create letters that can connect people.

The adventures of Kaoru and her lovable roommate Rilakkuma, a bear who wants to spend each day just lazing around.

3) The Disastrous Life of Saiki K.

Saiki Kusuo is a powerful psychic who hates attracting attention, yet he is surrounded by colorful characters who always find a way to remove him from his everyday life.

In a city so dismal it’s known only as “the Hole,” a clan of Sorcerers has been plucking people off the streets to use as guinea pigs for atrocious “experiments” in the black arts. In a dark alley, Nikaidou found Caiman, a man with a reptile head and a bad case of amnesia. To undo the spell, they’re hunting and killing the Sorcerers in the Hole, hoping that eventually they’ll kill the right one. But when En, the head Sorcerer, gets word of a lizard-man slaughtering his people, he sends a crew of “cleaners” into the Hole, igniting a war between two worlds.

The Seven Deadly Sins were once an active group of knights in the region of Britannia, who disbanded after they supposedly plotted to overthrow the Liones Kingdom. Their supposed defeat came at the hands of the Holy Knights, but rumors continued to persist that they were still alive. Ten years later, the Holy Knights staged a coup d’état and captured the king, becoming the new, tyrannical rulers of the kingdom. The third princess, Elizabeth, then starts out on a journey to find the Seven Deadly Sins and enlist their help in taking back the kingdom.

Frustrated with her thankless office job, the 25-year-old red panda copes with her daily struggles by belting out heavy metal karaoke after work.

Kazuo Yamashita is an ordinary fifty-six year old man who one day is summoned by the chairman of his company and hired as a manager of a gladiator. He learns that these hired gladiators engage in battles called “Kengan Matches” to protect the corporate rights of the businesses they represent. Kazuo Yamashita is assigned to manage a mysterious Kengan fighter named Ohma Tokita. Both men join the “Kengan Zetsumei Tournament” with the hope of winning the spot as chairman of the Kengan Organization.

The funny and romantic misadventures of a couple of kids passionate about arcade games in 1991 Japan.

Edamura Masato is said to be Japan’s greatest swindler. One day, however, he finds out that he is actually not the greatest, while he tries to steal from a foreigner, he finds that all his money was stolen instead. He chases the snatcher all the way to Los Angeles and learns that the foreigner is Laurent Thierry, a man, who has ties to international criminal organizations. Will Masato escape the mafia?

In a world of anthropomorphic animals, a reclusive wolf’s complicated relationship with a kindly rabbit is tested by a classmate’s murder, a charismatic deer’s influence, and his own burgeoning predatory instincts.

Akko Kagari is an ordinary girl who joins the renowned witch academy for witch girls, Luna Nova Academy. When she was younger, she went to Magical Festa, a magic show hosted by a witch named Shiny Chariot. Akko was so mesmerized and inspired by Shiny Chariot’s performance that she dreamed to someday be a “cool” witch like her.

Two girls, from different backgrounds but sharing a love for music, meet and change history with their united musical talent.

A thousand years ago, our solar system was destroyed by gigantic shapeshifting-aliens called Gauna. The human race created massive spaceships before it, they each voyaged to find a planet where they can live in peace. This story is one of spaceship named Sidonia fights against Gauna, with the central focus on Nagate Tanikaze who is a enigmatic teenage boy becomes one of pilots of guardian-robots, and grows up to be Flying Ace called “Knight of Sidonia”.

“If you blush, you lose”. Living by this principle, middle schooler Nishikata gets constantly made fun of by his seat neighbor Takagi-san. With his pride shattered to pieces, he vows to turn the tables and get back at her some day. And so, he attempts to tease her day after day, only to find himself victim to Takagi-san’s ridicule again sooner than later. Will he be able to make Takagi-san blush from embarrassment even once in the end?

With demons reawakened and humanity in turmoil, a sensitive demon-boy is led into a brutal, degenerate war against evil by his mysterious friend, Ryo.